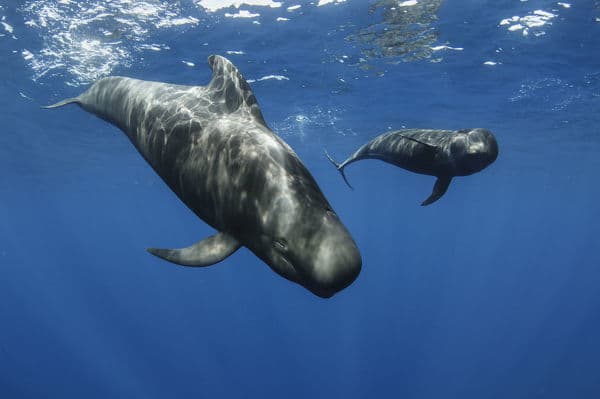 Short finned pilot whale are found around the world in tropical and temperate oceans. They are long-lived, slow to reproduce, and highly social. They live in stable groups of 15 to 30 animals made up of close family relatives and tend to live in localized, resident populations, although some populations have wider ranges. Their diet consists mostly of squid, with a small amount of fish. They are commonly found along the coast close to the continental shelf, although some populations have been found to extend into deep, open ocean environments, such as in the western tropical Atlantic Ocean.

The short-finned pilot whale has a bulbous melon head with no obvious beak. Its dorsal fin is far forward on its body and has a relatively long base. The body its black or dark brown, with a large gray saddle behind the dorsal fin.

They feed mainly on squid, but they may also feed on octopuses and fish, all from moderately deep water of 1,000 feet or more. When they are swimming and probably looking for food, a pilot whale group can spread out over an area a half-mile wide.

Short-finned pilot whales often occur in groups of 25 to 50 animals. Males have more than one mate—typically a group has one mature male for every eight mature females. Males generally leave their birth school, while females may stay in theirs for their entire lives.

They are known as the “cheetahs of the deep sea” for their deep, high-speed dives to chase and capture large squid.

Short-finned pilot whales prefer warmer tropical and temperate waters. They can be found at varying distances from shore, but typically prefer deeper waters. Areas with a high density of squid are their main foraging habitats.

Short-finned pilot whales mature at around 10 years of age. The maximum lifespan is 45 years for males and 60 years for females. Females have calves every 5 to 8 years. Older females do not give birth as often as younger females. They are pregnant for about 15 months, then nurse for at least two years. The last calf born to a mother may be nursed for as long as 15 years.